Cookies are not used for the processing, collection or storage of personal data under any circumstances. If you would like to prevent this website from using cookies, adjust the cookie settings in your browser. Changing this setting will alter the functionality of this site and your user experience could be diminished.

A screw thread is defined as a ridge of uniform section in the form of a helix on either the external or internal surface of a cylinder. Internal threads refer to those on nuts and tapped holes, while external threads are those on bolts, studs, or screws. 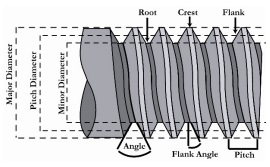 The distance measured parallel to the thread axis, between corresponding points on adjacent threads, is the thread pitch. Unified screw threads are designated in threads per inch. This is the number of complete threads occurring in one inch of threaded length. Metric thread pitch is designated as the distance between threads (pitch) in millimeters.

The flank angle is the angle between a flank and the perpendicular thread axis. Flank angles are sometimes termed "half-angle" of the thread, but this is only true when neighboring flanks have identical angles; that is, the threads are symmetrical. Unified screw threads have a 30° flank angle and are symmetrical. This is why they are commonly referred to as 60° threads.

Pitch diameter is the diameter of a theoretical cylinder that passes through the threads in such a way that the distance between the thread crests and thread roots is equal. In an ideal product, these widths would each equal one-half of the thread pitch.

An intentional clearance is created between mating threads when the nut and bolt are manufactured. This clearance is known as the allowance. Having an allowance ensures that when the threads are manufactured there will be a positive space between them. For fasteners, the allowance is generally applied to the external thread. Tolerances are specified amounts by which dimensions are permitted to vary for convenience of manufacturing. The tolerance is the difference between the maximum and minimum permitted limits.

The following illustration demonstrates the pitch diameter allowances on a 3/4-10 bolt and nut. 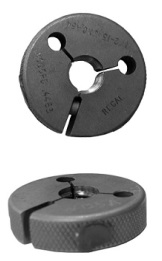 Go and No-Go Gauges are threaded rings that are tapped in such a way that they ensure proper tolerancing of parts. Similar devices are available for internally threaded fasteners.

Per the acceptance requirements of ASME B1.3, System 21, the allowance specified for the Class 2A external threads is used to accommodate the plating thickness. The plain finished parts (or plated parts prior to plating) would be tested for adherence to these tolerances with a 2A Go/No-Go thread gauge. The 2A Go gauge would ensure the pitch diameter falls below the maximum requirement; the No-Go gauge would verify that the pitch diameter is above the minimum requirement. A standard electro-zinc plated 2A part would be gauged with the Class 3A Go (due to the plating metal thickness) and 2A No-Go gauge after plating.

Thread damages such as dents, scrapes, nicks, or gouges and plating build-up are not cause for rejections unless they impair function and usability. Threads that do not freely accept the appropriate Go ring gauge shall be inspected by allowing the screwing of the gauge with maximum allowable torque value of:

There are three standard thread series in the Unified Screw Thread System that are highly important for fasteners: UNC (coarse), UNF (fine), and 8-UN (8 thread). A chart listing the standards sizes and thread pitches with their respective thread stress areas is listed in the Fastenal Technical Reference Guide, along with a special series designated UNS.

Below are some of the aspects of fine and coarse threads.

Numerous arguments have been made for using either fine or coarse threads; however, with the increase in automated assembly processes, bias towards the coarse thread series has developed.

The UNR thread is a modified version of a standard UN thread. The single difference is a mandatory root radius with limits of 0.108 to 0.144 times the thread pitch. When first introduced decades ago, it was necessary to specify UNR (rounded root) threads. Today, all fasteners that are roll threaded should have a UNR thread because thread rolling dies with rounded crests are now the standard method for manufacturing most threads.

UNJ thread is a thread form having root radius limits of 0.150 to 0.180 times the thread pitch. With these enlarged radii, minor diameters of external thread increase and intrude beyond the basic profile of the UN and UNR thread forms. Consequently, to offset the possibility of interference between mating threads, the minor diameters of the UNJ internal threads had to be increased. 3A/3B thread tolerances are the standard for UNJ threads. UNJ threads are now the standard for aerospace fasteners and have some usage in highly specialized industrial applications.

UNJ bolts are like UNR, but the curve of the thread root is gentler which requires that it be shallower. In fact, the thread root is so shallow that the bolt thread cannot mate with a UN nut, so there is a UNJ nut specification as well.

Threads can be produced by either cutting or rolling operations. The shank of a blank designed for cut threading will be full-size from the fillet under the head to the end of the bolt. Producing cut threads involves removing the material from a bolt blank with a cutting die or lathe in order to produce the thread. This interrupts the grain flow of the material.

Rolled threads are formed by rolling the reduced diameter (approximately equal to the pitch diameter) portion of the shank between two reciprocating serrated dies. The dies apply pressure, compressing the minor diameter (thread roots) and forcing that material up to form the major diameter (thread crests). Imagine squeezing a balloon with your hand; you compress with your fingers to form the valley, while allowing part of the balloon to expand between your fingers. This is the concept behind roll threading. Rolled threads have several advantages: more accurate and uniform thread dimension, smoother thread surface, and generally greater thread strength (particularly fatigue and shear strength).

Thread cutting requires the least amount of tooling costs. It is generally only used for large diameter or non-standard externally threaded fasteners. Thread cutting is still the most commonly used method for internal threads. 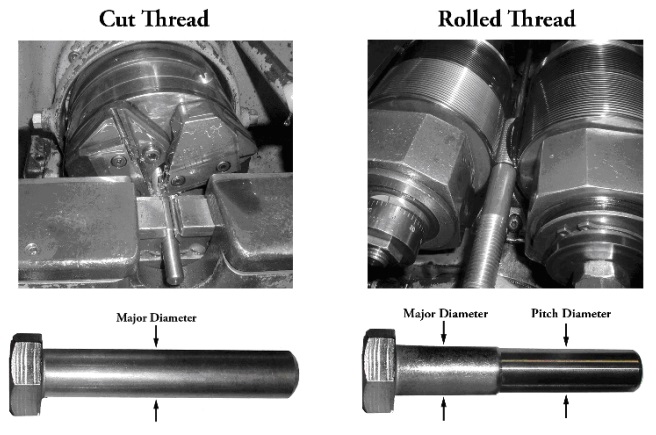 Two fundamentals must be considered when designing a threaded connection 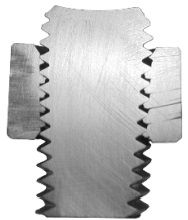 Taking proper precautions during the design phase is vital to avoiding thread failure. Once the first engaged thread begins to shear, the threads behind it will also shear in rapid succession.

The tensile strength of most fasteners is usually specified, whereas shear strength is not. In order to avoid shearing the threads, ensure that the length of engagement between the internal and external thread is long enough to provide adequate cross-sectional thread area.

Failure scenarios #1 and #3 can typically be avoided by ensuring proper thread engagement. With proper engagement, those scenarios would result in a tensile failure of the bolt rather than thread stripping.

Generally the hardness and the actual material strength of a nut is less than the bolt. For example, if you look at the hardness of an SAE J995 Grade 8 nut (HRC 24-32 up to 5/8-in diameter), it is likely to be less than the SAE J429 Grade 8 bolt (HRC 33-39). This is designed to yield the nut threads to ensure the load is not carried solely by the first thread. As the thread yields, the load is further distributed to the next five threads. Even with the load distribution, the first engaged thread still takes the majority of the load. In a typical 7/8-9 Grade 8 nut, the first engaged thread carries 34% of the load. Using internally threaded materials with higher strengths and hardness can often result in fatigue and/or loosening.

Caution: It appears that one could theoretically increase the thread strength by increasing the length of engagement. However, as illustrated in the Load Distribution chart above, the first thread will be taking the majority of the applied load. For carbon steel fasteners (including tapped holes) the length of engagement would be limited to approximately one nominal diameter (approximately 1-1/2 times the diameter for aluminum). After that, there is no appreciable increase in strength. Once the applied load has exceeded the first thread's capacity, it will fail and subsequently cause the remaining threads to fail in succession.

If the nut proof stress does not exceed the proof strength of the bolt, stripping failure is very likely.

Returning to the discussion of fundamentals in thread connection design, the nut or tapped hole should support more load than the bolt. Thus, the design criteria for threaded connections also leads to nut selection criteria which help the designer ensure functionality in the joint. The following are the basic rules: